The next morning we woke up and went to a delicious breakfast buffet. We were told to wear our boots, snow pants, long underwear, fleece, hats, jackets – we guessed we were definitely going to be doing something in the snow.  Marshell had noticed a yellow helicopter in a field near the hotel and so we wondered if the helicopter had something to do with the shoot. Finally, they divided us into three groups and told us to go down to the field to wait. The helicopter was no longer there but very soon we saw it flying overhead and it came to land in the field. Beth, Guy, Kyle, and I were in the first group that would be going up in the helicopter.

We took off and soon were flying over the mountains – I’ve never seen anything quite so beautiful – white snowy peaks everywhere. The cameraman focused on Beth and Guy – they are definitely external processors and had a lot to say as we went zooming over the mountains. I said nothing – just soaked it all in. As we soared along, finally we saw some patches of color below and we could tell that was where the film crew was set up. We came to a landing and exited the helicopter. The helicopter then left to go and pick up the next groups of the cast. Beth, Guy, Kyle and I blinked at the sunlight and the snow and greeted the crew who were up there waiting for us. There was a tent set up where we could go in and get a little warm so we did that.

Finally, the whole group was there and then they took some shots of all of us by the helicopter and the helicopter taking off. They wanted it to look like the helicopter had just left us there in the middle of nowhere and we had to hike to figure out where to go – so we hiked up a tiny hill and there were twelve backpacks up there. They filmed us looking at the contents of the backpacks and putting on skis. I hadn’t been on skis for about twenty years.  I could hardly stand upright on them but I wasn’t the only one.  For a couple hours they filmed us skiing back and forth on the mountainside and they filmed us from every angle. It was cold but not too bad because we were moving around and laughing a lot.

Next, we filmed the part where we “meet” Henriette and she shows us the ice cave. The day started to get long now because there was a ton of waiting and being interviewed individually. It was very cool when we got to go in the room where they had displayed pictures with information about our families. My picture was of the Stavanger Cathedral and it said that my great grandfather, Julius Hetland, was baptized there. He is buried just up the road from where I grew up and it was so moving to see this connection with where he came from. I started crying – I couldn’t help thinking about how much it would have meant to both my mom and dad if they could have seen this.

Then, it was time for more waiting and more bits of filming. I remember at one point I had gone down to the tent to warm up for a minute but apparently the producers wanted us up in the ice cave and so Thor said to me, “Ruth, you have to go warm up in the ice cave now.” Of course, I dutifully went right away but as I was walking up the hill I thought about how that was kind of a messed up thing – to be “warming up” in a freaking ice cave.  🙂

It was getting to be 8 or 9 pm and we were still filming. Next we were to head over toward some tents that were set up about a quarter mile away. We laughed and joked on the way over there that they would never really make us sleep in these tents. It was cold and windy and we had been outside all day, I was shaking and starting to feel pretty bad.  I didn’t say anything – I just kept thinking it was all going to be done soon. Up until this time our accommodations and treatment had been so cushy.  We honestly never dreamed we would actually have to sleep in the tents – we thought they would just film us by the tents, eating the reindeer stew, and then take us somewhere warm.  But NOOOOO!

We found out we would be staying in the tents. There were little stoves in the tents that had to be filled with wood all night to keep the fire going – but the stove really emitted very little heat. We all had good sleeping bags but it was a very long night. I couldn’t get warm. The wind kept picking up more and more. I doubted we would experience many nights like this while on Alt for Norge – because I had seen all the other seasons and it wasn’t usually like this!  Maybe they were doing something different for season 5 – a sort of Survivor edition of Alt for Norge?  Time would tell. But for now, I was cold to my very core and praying for morning to come quickly. 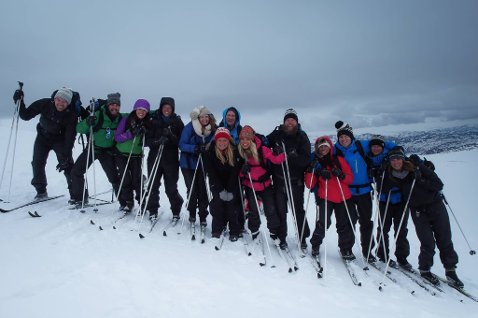